Helen joins cast of The Royals

I am thrilled to be joining the cast of E!’s brand new TV drama The Royals!

The highly-anticipated show is E!’s first scripted series and comes from the creator of One Tree Hill – Mark Schwahn. The series is based on the lives of a fictional Royal family set in modern day London whose lives are under constant public scrutiny. The show will feature their lavish lifestyles both outside and inside the palace gates where scandalous secrets lie!

I play the role of the TV Reporter, covering key moments in the Royal calendar, such as Prince Liam’s (Moseley) first outing as new heir. The entire series was filmed here in the UK with my scenes being shot at 3 Mills Studios. 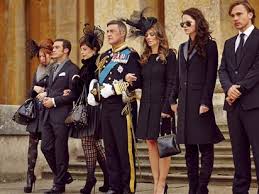